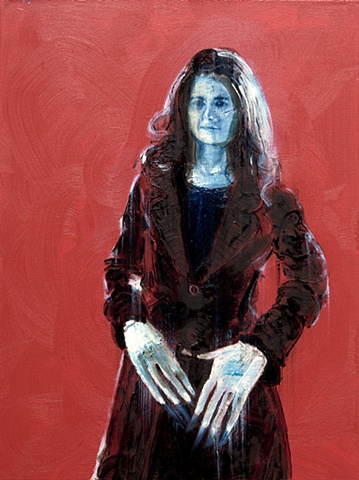 I'd just moved into what is now my studio in Hiawatha and hadn't painted in a good while. I feared my touch, my chops, such as they were, had crumbled and would need considerable time to rebuild. Behind these fears lurked an idea that I'd had it as an artist, that I was an also ran.

This is the first painting made in this studio.

She has large hands indeed. Were I ever to meet her, and she appeared essentially as I've painted her, I would immediately turn myself in to the state hospital for fear that I had become an unconscious god.

Consider all insult not our own—earthquakes, tsunamis, diseases, tornadoes, hurricanes, the insults of aging, accidents, volcanoes, venomous creatures, predators (the list is legion, I do guarantee)—and consider if you desire such a touched god. Consider these in fairness of all wonder, beauty and benefit which are also legion.

If you arrive at my studio tonight (a much more romantic setting) with pitchforks and torches in hand, I will understand. As the rubble is turned the next morning, I only ask that you consider who had made me, and who had made...you.